dpetty
September 2014 edited September 2014 in General
Dave is always sharing excellent videos. I found this one fascinating and interesting spitz video. A couple similarities I noticed between my laikas that explained some things I believed my dogs were doing: First, a few barks and my dogs would shut up and I thought the dogs were doing this because they smelled a squirrel. I thought they were trying to get the squirrel to move to locate it because it was a layup. This has happened on several occasions and I can typically tell by the bark it is not as excited and they will circle around trying to use the wind in their favor. When I heard the narrator talk about this it confirmed my thoughts. Second, is that the more you share your life with these dogs the harder they hunt for you. Watching the cabin scene with the dog and hunter is exactly what I believed to be true. Even though I have enjoyed training the pups I had for their future homes I miss time with Ivan and Kilbe. One always rides up front in the vehicle on the way to the hunt and then I put the other in the dog box in the back. On the way home I reverse what ever dog was in the box sits beside me and the other is in the box. Each dog that rides with me I either share a little of my breakfast with them or lunch upon my return. Talking to them and either telling them we are going to have a good day hunting or how we had a good hunt. Sounds crazy but I enjoy that as much as the hunt. Enjoy: 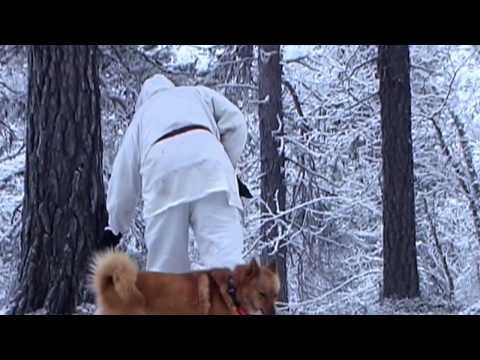